These People of the Road

These People of the Road

Travel is a curious thing. You set yourself targets primarily because they facilitate momentum. The old adage of ‘the first step is the hardest’ rings somewhat true with travel and applying a destination to the proceedings generally find you packing your bags and heading out of the door.

We often get asked, “Where are you looking forward to the most?” A question that leaves me stumbling because I simply?don’t know. I think ‘where’ I am looking forward to the most is the place that I? know little about, have not seen or do not understand. That’s part of why I travel. Contrary to potentially popular belief, I am not that confident a traveler. I am curious and I?don’t care too much about the consequences but I wouldn’t say that I boldly?stride into new territory like yesterdays English seafaring explorers. Some lack of confidence is part of what I enjoy about traveling. It keeps me on my toes. Overcoming those difficult interactions, dealing with foreign problems and generally not knowing what is going on are enjoyable things to overcome, if and when you finally overcome them.

The question I do know the answer to is “What are you looking forward to the most?” The curious answer, made all the more unexpected given my happiness in either being alone or in very small and tight-knit company, is that I look forward to meeting people on the road. I like weird, I like short interactions, I like character. Actually, I quite like short, weird characters too. I like those people that?don’t toe the line. When you are traveling these cameo appearances are so ubiquitous that I feel I am constantly in my people happy place. Constantly sampling the finest Belgian Truffles of interaction as opposed to having to chow down on a kilo of Hershey’s commitment.

We stumbled upon Tim Scully at the Overland Expo in Flagstaff in 2017. He was busy attempting to get overzealous?seniors to drive their off-road vehicles carefully over his rock-strewn Land Rover sponsored course, which they did with varying degrees of prowess, usually dependant on how well they followed Tim’s instructions. Watching a husband trying to hold it together while his wife drags the underside of their shiny Toyota Landcruiser over some rocks is top quality entertainment.

We spoke to Tim about some off-road training, swapped numbers and went on our way. Jump forward a few months and we’re calling him to ask if he knows anyone that can help us with our truck fix predicament in Sacramento. Skip forward a few months more and you’ll find Claire and I sitting at the Scully dining room table enjoying their family Taco Tuesday, complete with their parents and sub-two-year-old Gracelynn, having been camped out on their driveway in a rented Cruise America?motorhome for the previous week or so. Apparently, travelers ‘holed up’ on their driveway is nothing new to these two, although we were the first to add two motorhomes to their existing collection of Land Rovers, Jeeps and other family vehicles. 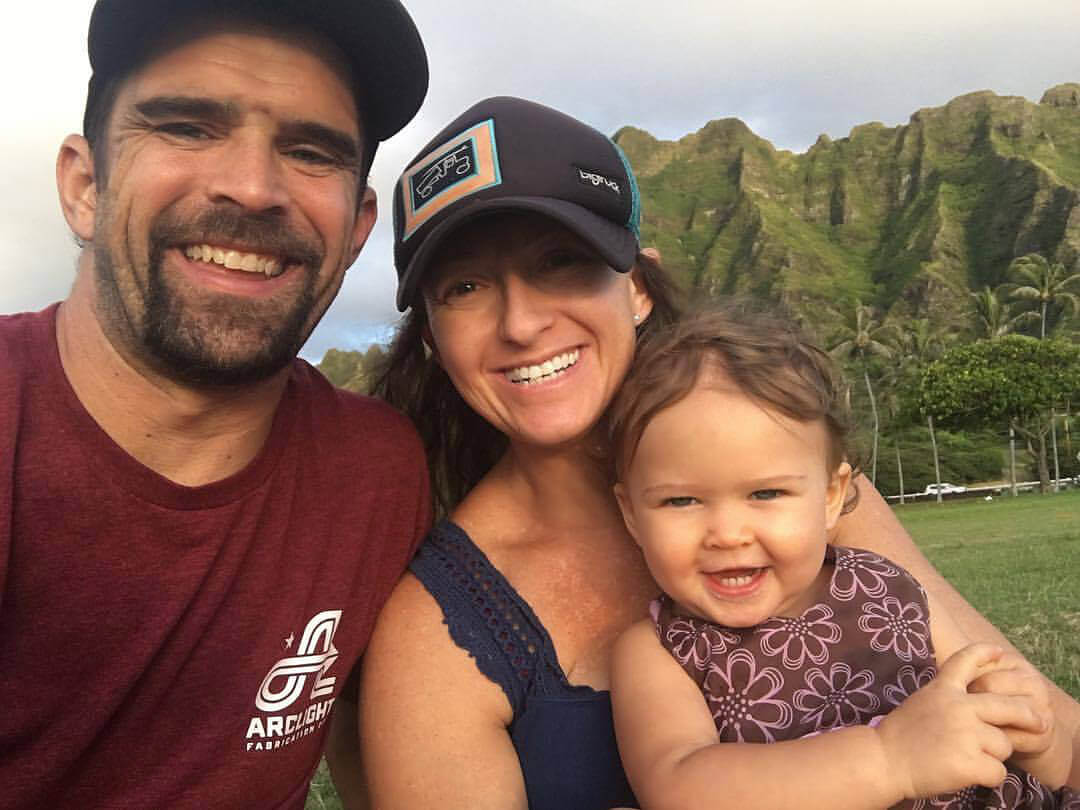 TJ is a wrench at Scully Offroad. He’s not the usual grease monkey. I am not sure whether it is his usual demeanor or a by-product of nicotine withdrawal but you’ll not get too much out of TJ, barring some excellent mechanic advice or some dry humour. I like TJ. He has one thumb and a ‘cut here’ tattoo that circles what’s left of the other. He fixes stuff pretty quickly and has a ‘problem antennae’ that picks up on any car issue related conversation within a one mile radius, whereby he saunters over and offers a solution like a slightly oily and thoughtful version of Mystic Meg. He has a love/ hate relationship with Land Rover rust and a shiny new red Ford F150. He likes tacos. He’s cool. 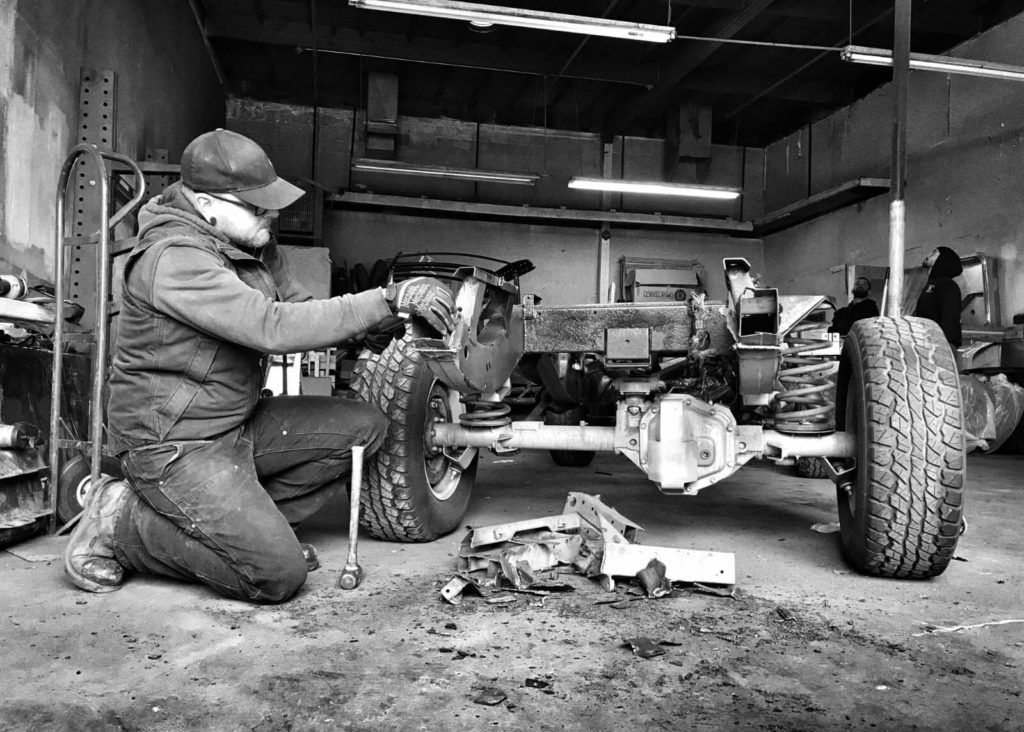 Proof that you meet wonderful people in the most unlikely of places comes in the form of Linda. The overland traveler does occasionally wash their dust-covered clothing, and a laundrette / laundromat / fluff ‘n’ fold can be elevated to an unexpectedly exciting experience as you dream of slipping into to something that smells good and isn’t capable of walking around on?its own having been worn to death for a few weeks on the road. Froggy’s in Sacramento was our laundry of choice. Nothing unusual here, a well-used bevy of top loader washers and front-load dryers that happily take the brunt of your underwear and ill-advised fashion choices for a few shiny quarters.

Linda ambled over to explain how the machines work, along with their particular peculiarities that attempt to steal your coins. At first glance, you might be fooled by the typical look of someone that works in a laundry. But dig a little deeper and you’ll find Linda was overlanding before overlanding was a thing. Scurrying around the globe on her own with a backpack in the 70’s, laying waste to country after country in Africa, Europe, Asia and the Americas, before settling back down in Sacramento where her family is based. She has a million traveler tales, traveling by foot, boats, bike, train, hitchhiking. Literally, the queen of?independent travel all done at a time when traveling?independently simply wasn’t done. Linda is pretty cool.

The pain of the State Park reservation system requires multiple lineups at the kiosk/reception in San Elijo State Park each morning. I couldn’t bear to do it again and we hadn’t booked already so we headed towards San Diego and searched for somewhere, preferably free, that we could camp. Mariner’s Point was noted on the app iOverlander as being in the grey area between being, theoretically, not allowed to camp and authorities turning a blind eye. So we headed there. Don’t let the coroner coming to remove a deceased homeless guy put you off, it cost nothing, had a nice view, was quiet at night and we were inches from the water.

Our second night had us parked next to what I now know as Maurice the School Bus. A well used, yellow, diesel beast that had its innards?adjusted to make a more comfortable housing situation for Frank and Marie; two French-Canadians from Quebec whose rockclimbing and surfing road trip had undergone an entirely unwelcome ankle break. Marie hobbling around in a robo-boot after a climbing accident. I asked them to come over for a beer and got their story.

They wanted to travel, bought an old school bus, camped out at Home Depot’s car park while they ferried kitchen cabinets and countertops back and forth between the store and their yellow bus and were headed to Mexico, where they are now. As much as I love our tricked-out camper, I also love the complete opposite and admire those that build their own dream escape. If you can eat, sleep, carry your hobby gear and move it all around then you are overlanding. They’re super nice people and we?hope to catch up with them in Mexico. 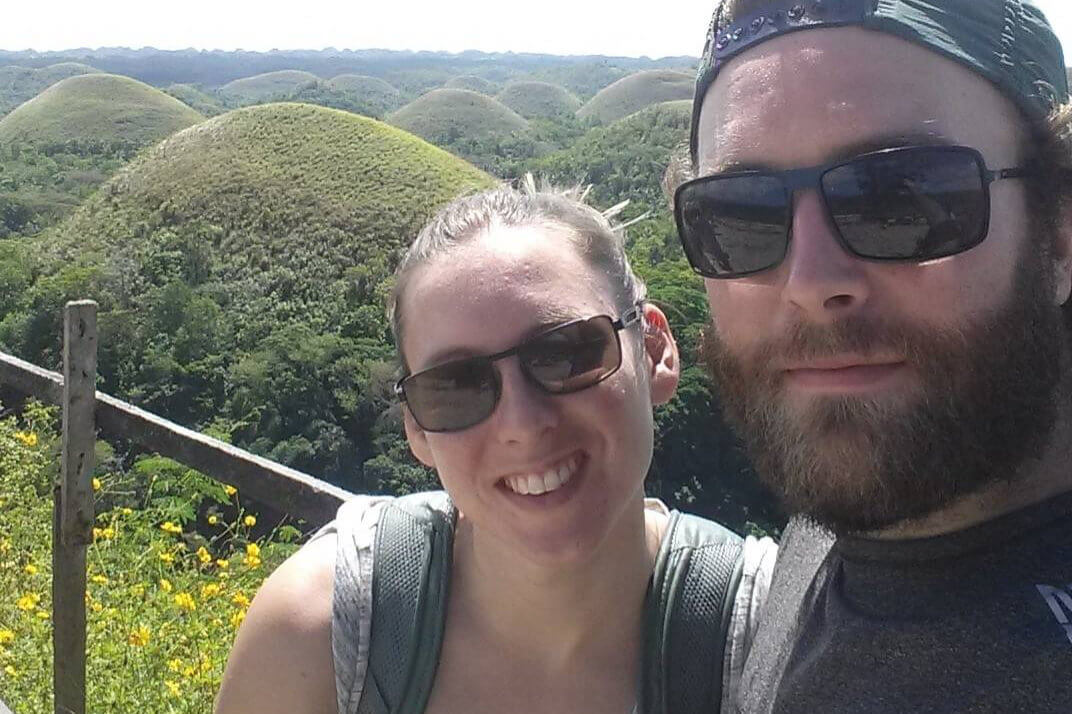 Marie-Pier and Frank, owners of Maurice the School Bus

We had an appointment with Deaver Springs. They rebuild leaf spring suspension, a task that required our truck for a few hours and us to stay overnight at the Orange County Fairgrounds, Cali. We’d arrived shortly before a plane emergency landed on the freeway, I remain unsure whether to be happy we avoided the delay or annoyed we missed the spectacle. As time passes I inevitably lean towards the latter.

The following morning, prior to Deaver, we headed to Dick Church’s Restaurant. An eatery styled straight from the set of Starksy & Hutch, or maybe the other way around given its age. The food was good, the company was better. A sassy 50 something waitress with a never-ending supply of strong coffee constantly altering the ratio of milk and sugar in my cup in that way that North American servers do. It was old school fast and friendly service.

The interior was all 70’s with dark wood paneling and framed historic articles. We asked how long it had been there and no-one really knew, other than the fact it had been some time?in the early fifties or late forties. We sat down at the counter on orange vinyl bar swivel stools and were quickly joined by Herb, a Dick Church regular, stocky and smartly dressed, settling himself on the stool next to me. Herb was a septuagenarian in a US Forces ball cap with a calm demeanor and the kind of slow, meticulously timed humour that only old guys get to have. He’d been around and after settling into my accent told me he was friends with an English guy in the marines.

The fun truly started when another regular joined us at the bar; the waitress reliably informing us that the new guy (whose name escapes me) was about to not stop talking. He was an immigrant from Pensylvania, his already short legs surrounded by a ridiculous pair of even shorter jeans that, he proudly announced to the restaurant, were a $1 garage sale purchase, presumably from a local gang member given the outlandish stitching on the back pockets. The jeans value lay in both comedy and their condition, having been wisely unworn by the previous owner. In the space of five minutes I was well versed in the backstory of Dracula, his own migration to the US via some form of prison camp and his favorite type of World War 2 Bomber;?a Lancaster in case you were wondering. Herb had been here before, juggling stories, tips on the area and quips about Mr. Pensylvania’s jeans, with me; whilst placating Mr. Pensylvania’s needs with the occasional; approving nod or platitude. The Waitress acting as Ringmaster, whipping Pensylvania into shape with a scold when he became overbearing.

The whole episode was brilliant. We left the restaurant and just looked at each other with a grin. This is traveling?and the answer to “What do I look forward to the most?”

I mentioned previously the pain of the State Park reservation at San Elijo. One day we ran out of luck and ended up with no site for the night, thankfully Adriena and Oliver came to the rescue, neighbours we had met the night prior for beers who said we could share their site with them and Buffalo, their wonderful dog. Oliver and Adriena are well versed in travel having lived and worked in numerous far-flung places. I think we sparked, or at least re-ignited, a love of truck campers in Oliver. They currently show up al over the map in their small but very cool Tab trailer towed by an amply capable Subaru. Thanks to them we ended up armed with lots of off-road tips and info

To all those we have met so far, thanks for being part of the journey. We are just 6 weeks into the trip, I hope the quality of the faces we meet is maintained throughout our expedition.