Much has been written about Mayans. An ancient civilization wrapped in Central American history. Temples, gold and pyramids. They have chocolate too. A modern gold milled to perfection in some cases and botched to inedibility in others.

The modern day Mayan has been downgraded to a foot-note. Second rate actors hidden behind the curtain; stage left. A ‘tribe’ for the history books with maps detailing their Mexico/Central American ‘reach’ in times gone by.

Mexico boasts of Mayan outposts; occasional villages where Mayan life can be seen living and breathing. The state of Chiapas inviting us down twisty unpaved trails where, hours of choking dust later, we come across the fabled curved straw roofs of Mayan homes.

Tourism gathers at Mexican Mayan centres. Brightly liveried super-coaches pull into Chichen Itza car park, decanting a heady cocktail of nationalities into ‘Disney Maya’ to stare at the main Mayan pyramid, highly renovated, perfectly manicured and currently under siege by an Instagram yoga bunny, trying to pull off the perfect pose while other visitors lose patience and start to invade the scene of her fake serenity. 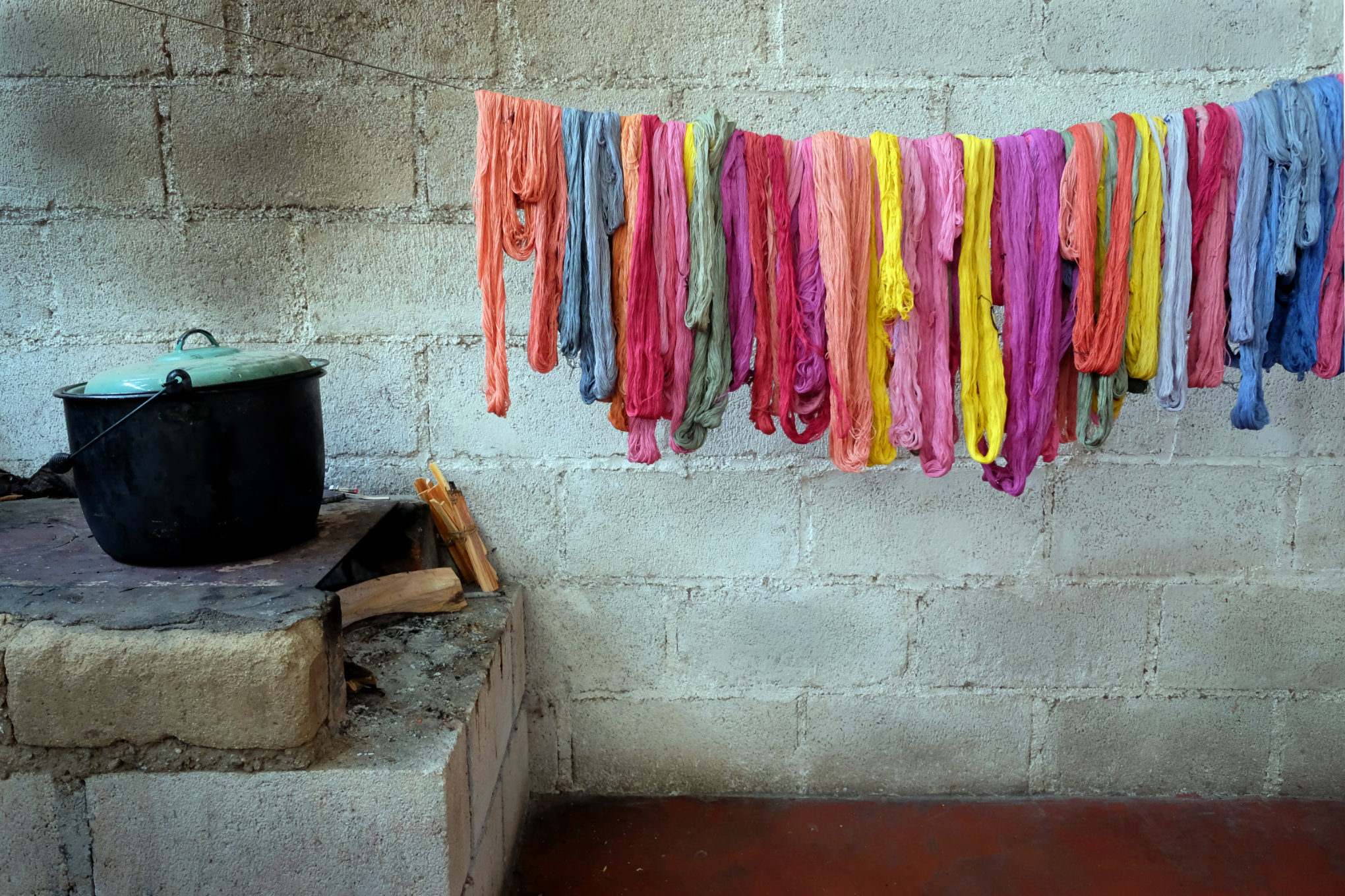 Then there is Guatemala

Guatemala takes ‘Mayan’ and destroys Mexico’s tenuous modern connections. In Guatemala, Mayans are alive. Breathing. Visceral. Everywhere. As we enter from Belize it’s all we see. There is no Mayan outpost of villages to seek out. They are ubiquitous.

The villages are Mayan, period. The people are Mayan, period. Almost every single woman is dressed head to toe in stunning woven traditional dress. Their short stature belying a massive traditional importance, carrying an earthy grace that exudes history. No matter how much you tower above a Mayan you are belittled by their resilience and cultural significance.

As recent as the late seventies and early eighties, Guatemalan Mayans were being massacred in the tens of thousands. A simply shocking statistic, and one that fills my heart with sorrow having spent time amongst them, witnessing their respectful, caring and humble nature. 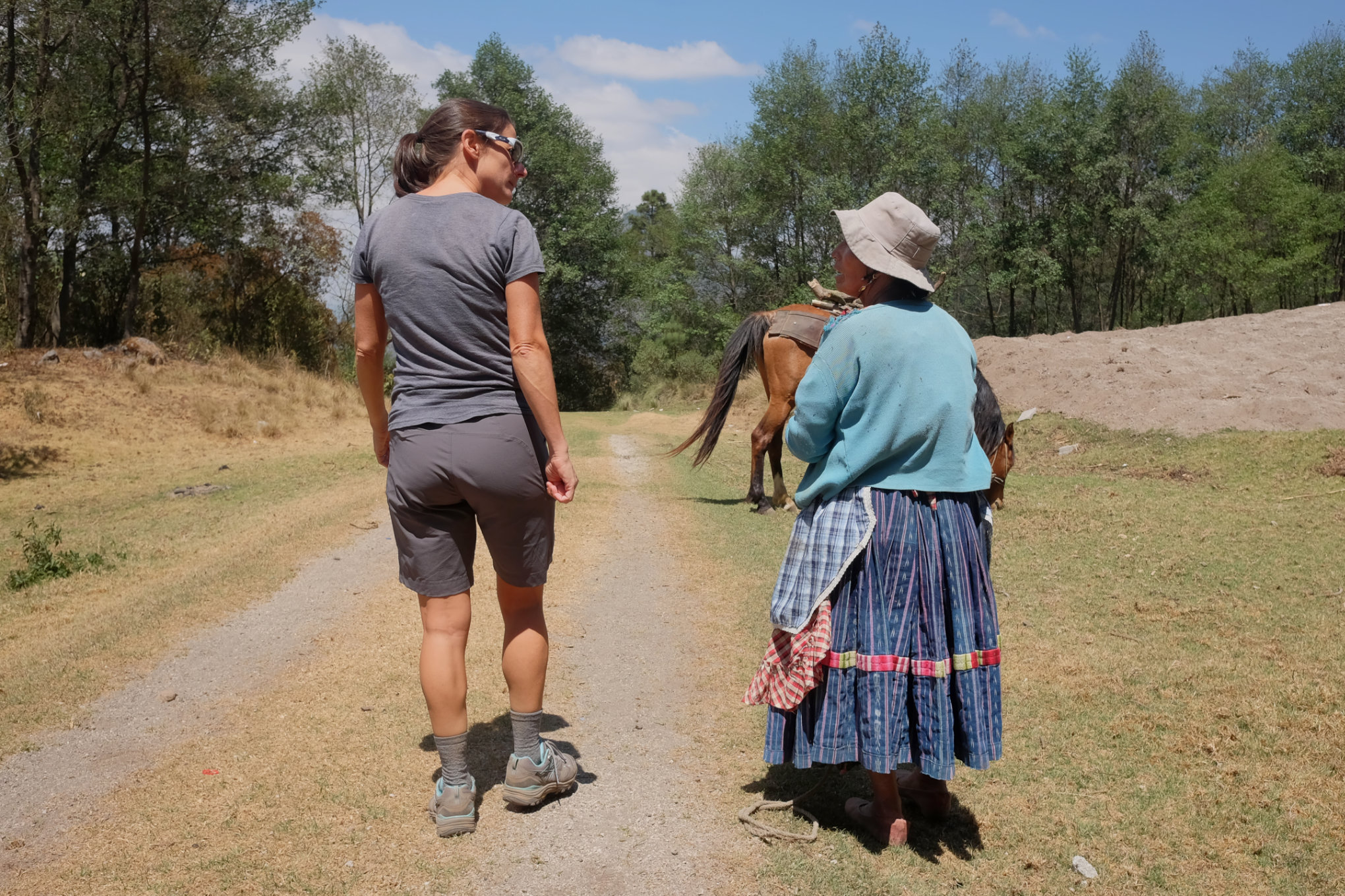 Meeting of the Giants – Quetzaltenango, Guatemala

We funnel through northern Guatemala, bumping the truck along main roads that, in other countries, would be deemed offroad trails – arriving at Lake Atitlan and Pasaj Cap campground. A storied and manicured slice of overland traveller heaven, overlooking the stunning lake and the towering Volcan San Pedro behind it. We plan to stay a week but it’s no surprise when the calendar nudges towards week four. Atitlan’s easy magnetism has been trapping travellers for years. 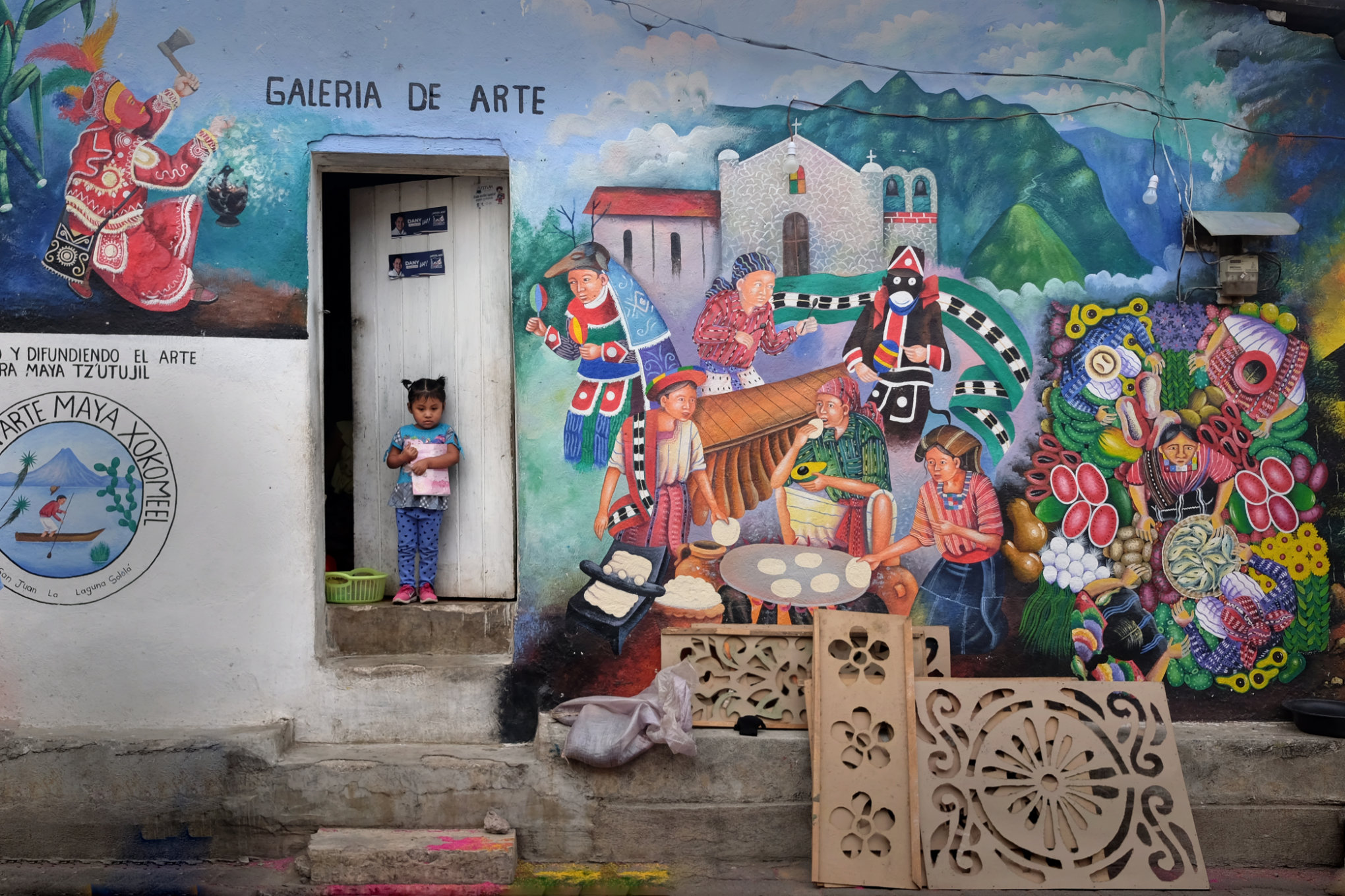 Spanish classes form an excuse for us to stay longer. A teacher, Rebeca, is recommended and she fortuitously walks down the camp driveway before Claire’s cellphone connects the call we were making to her. We are delighted to see she is Mayan. Fluent in English, Spanish, Q’eqche’ and Tz’utujil. 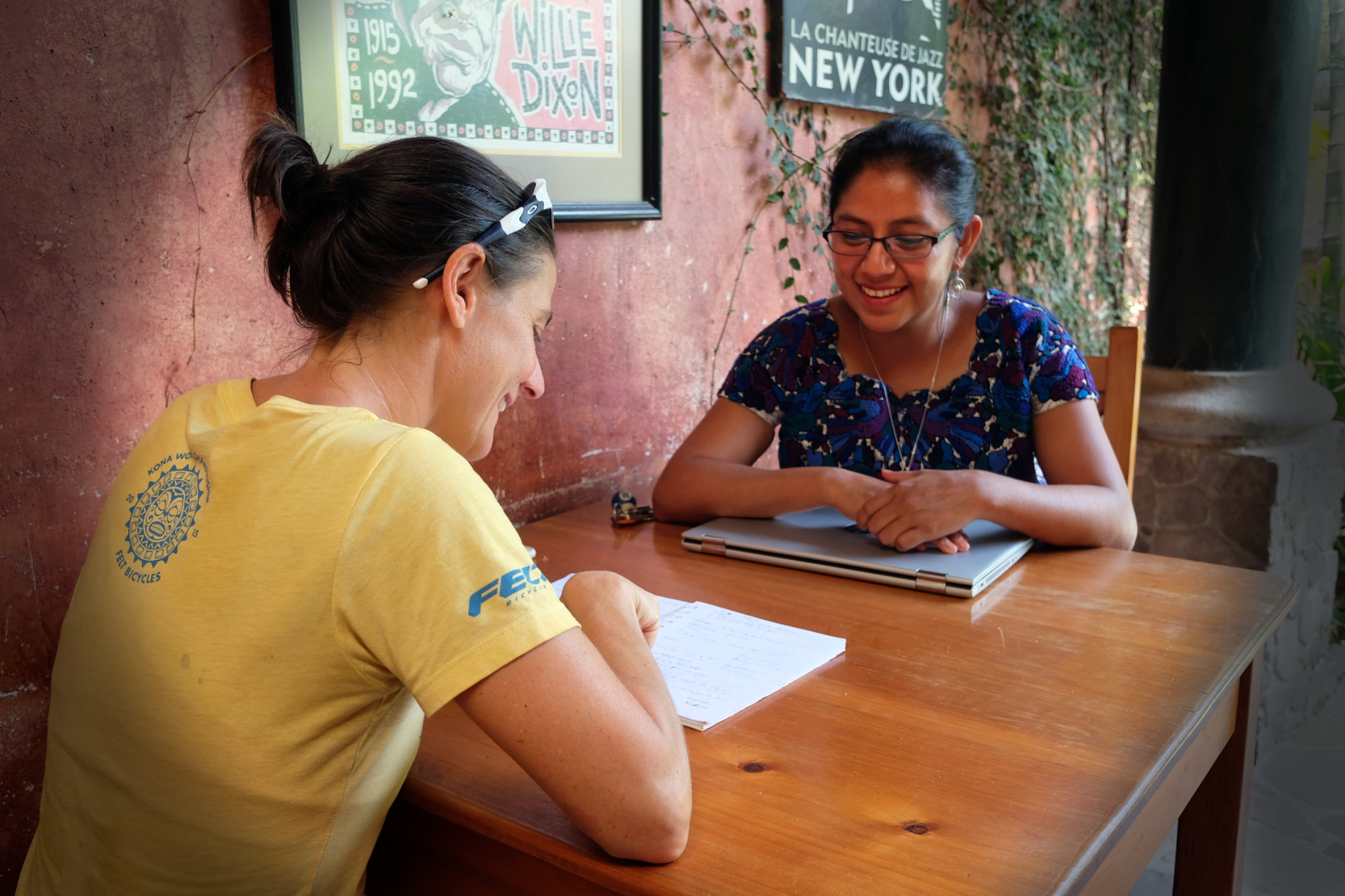 After one lesson we are both charmed, thanks in part to her wonderful personality, but also because, well, because she is Mayan, and intoxicating to just sit next to. The kind of person you start to miss even before your departure date. Her quirks and ‘Spanglish-isms’ already ingrained into our everyday speech.

As I mispronounce yet another verb conjugation, I am met with a shake of the head and “James? What is this?“. If I manage an accurate answer Rebeca extends an affirmative “uh-huuuuh” as she awaits the inevitable error just around the ‘esquina’.

My style adjusts, I decide to fire through the sentences, learning from mistakes rather than breaking the flow to search for the correct words. Rebeca concentrates hard, her hand raising like a conductor every time I screw up, verbally correcting one mistake just in time for my next. She has to be quick. 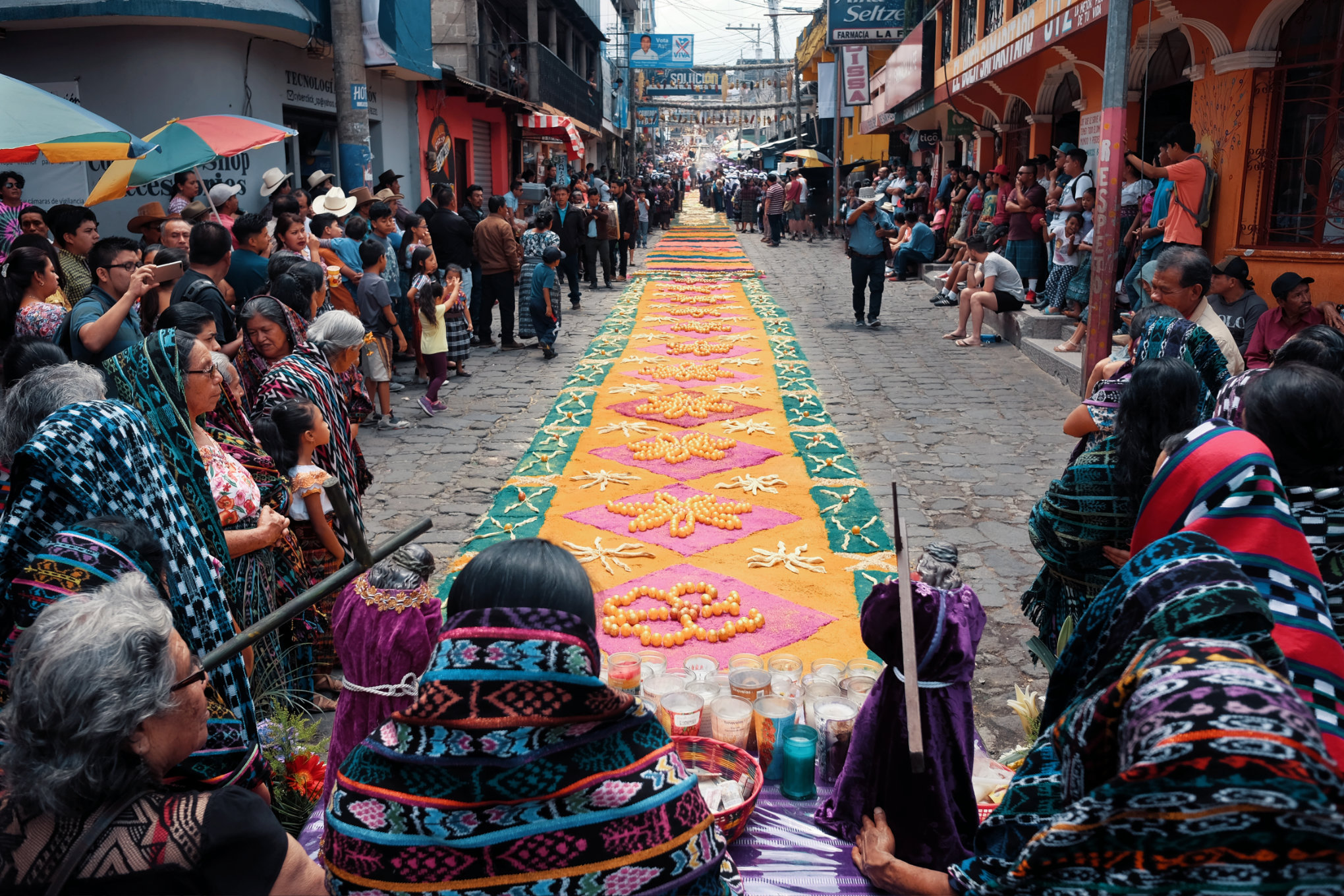 Holy week. A Christian Holiday that draws the ancient tribes to church. I wonder how Mayans, a culture dating to 2,000 BC got drawn to a religion that is a veritable child in comparison to their own.

We had heard of the processions over Easter Week, but weren’t prepared for the scale. A festival of colour juxtaposed with deference. Their bright and bold traditional symbolism crashing against the sombre nature of a semi-modern church. Joyful shawls sweep by glass display cases containing a supine Pinocchio Jesus, his wooden limbs and torso splashed (arguably over zealously) with crimson paint. Each effigy trying to outdo the next with crucifixion day war wounds.

Procession morning is Easter Friday. A clamour of activity.  The main roads around town are cleared, wooden stencils are being used to mark chalk outlines depicting church or village scenes along with simple patterns. Brightly coloured sawdust, an array of flowers and painted eggshells are added to create spectacular carpets of colour. These ‘Alfombras’ are the procession route. Wonderful creations destroyed as the worshippers make their way through the town and head to the church. 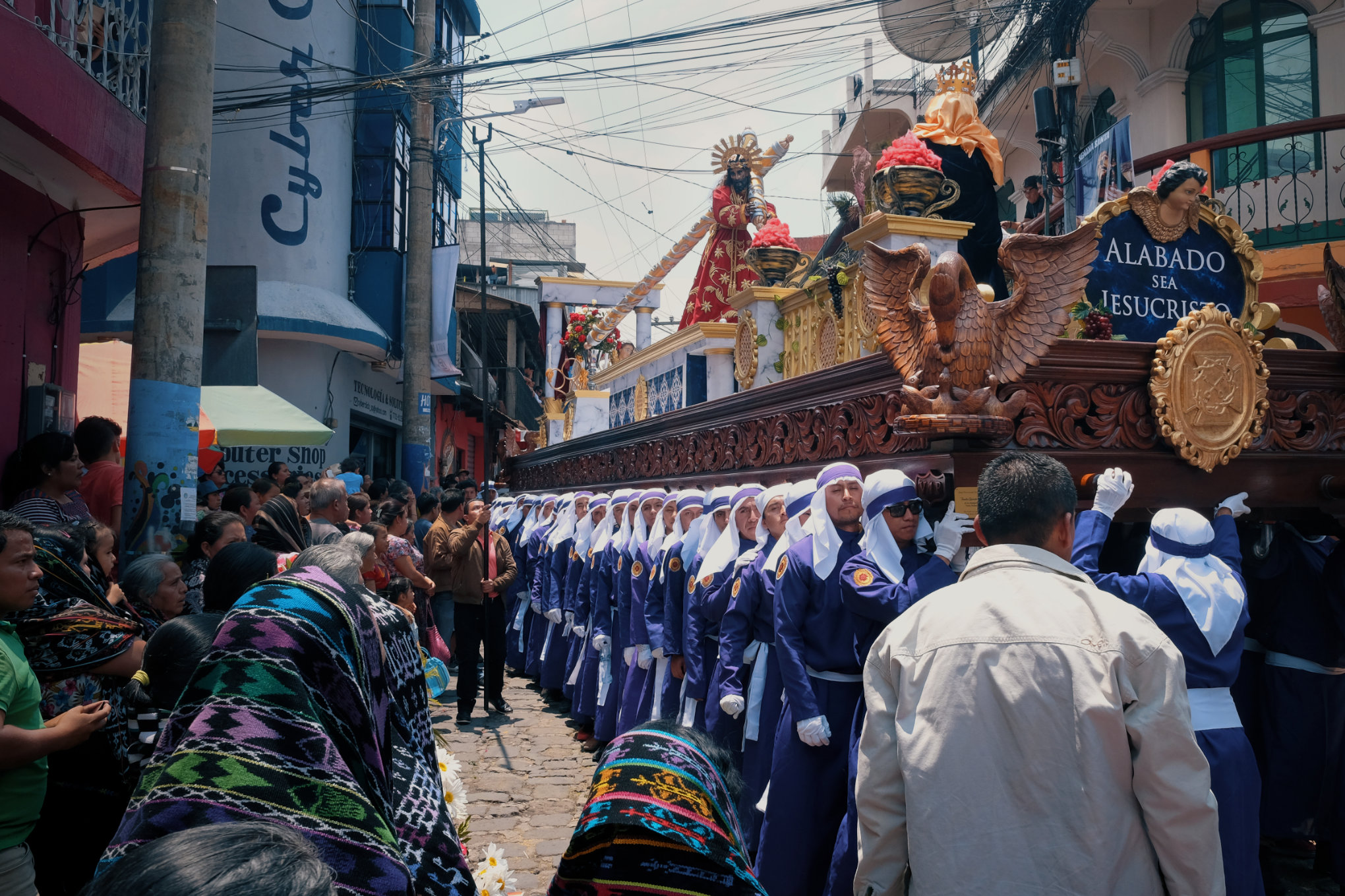 The air is thick with the smoke of burning Palo Santo and seriousness; crowds gather along the sides of the street.  They are awaiting massive wooden slabs. Platforms that carry a cross bearing Jesus. This, in turn, carried by a not insignificant number of Mayan men. Their number swaying gently, an effect that both distributes the effect of the enormous weight on their legs and gives the impression the whole thing is going to tip slowly, but certainly, to the floor.

Too many cooks leads the way, each shouting directions and orders to the team of platform bearers. Out of sync commands detailing when to pause and when to move forwards. A smaller platform follows in a similar fashion, carried by Mayan women, fewer in number but equally as burdened. The procession requiring several people to rid the airspace of power lines, signs, and other cross-street ephemera. A low ‘Discount Sale’ banner threatening to strangle the son of God and potentially crush the fifty or so purple gowned men carrying him.

Occasionally the platforms stop at pre-determined corners, huddles of Mayan women gather and pray, swinging orbs of incense over tables filled with lit candles. The effect is hypnotizing as we cling to the outside of a spectacle in which we play no part. The feeling that you are witnessing something special is tangible. An ancient culture bestowing ancient traditions onto another’s religious framework.

It’s intoxicating and, as we drift away from the ceremony, and real life slowly seeps back, we look back over our shoulders. Not sure if what we just witnessed was a cinematic tour de force. To colourful, too intense and too wonderfully foreign to be real life. 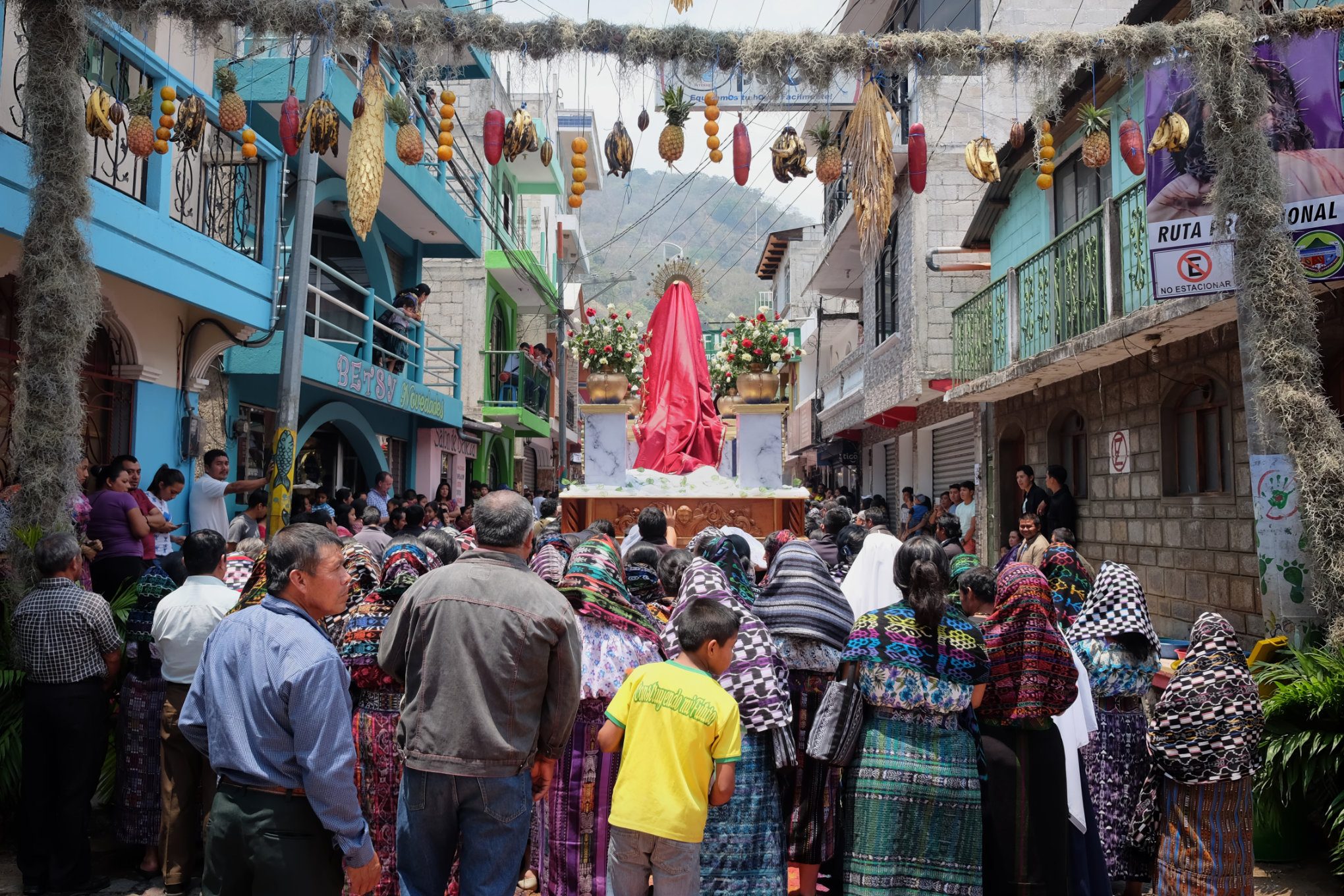